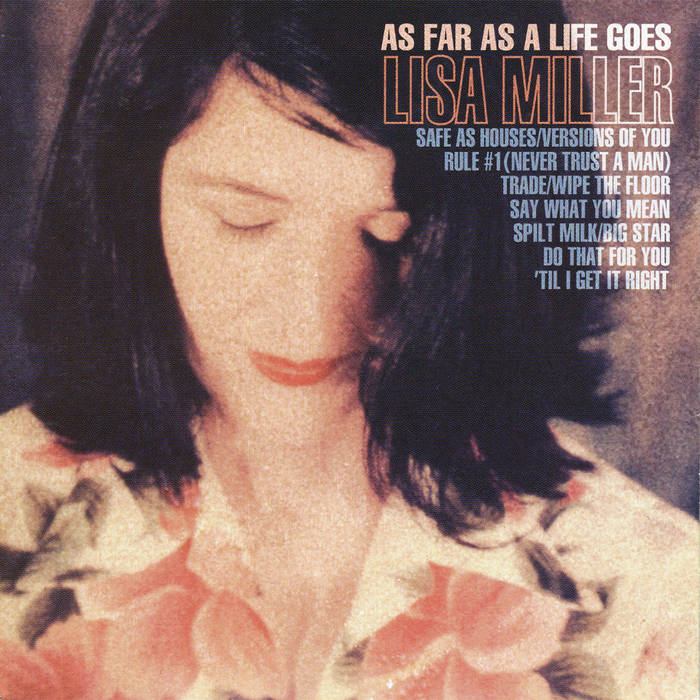 All songs by Lisa Miller (Mushroom)
except "Til I Get It Right" by R. Lane & L. Henley (BMI)

"Lisa Miller has the kind of voice that sends men into the forest for bonding camps to kill animals, drink beer, and attempt to reclaim their masculinity."
Rave

"She shifts from pop to rock and back to country without a hitch - and with depth of feeling dripping from every note."
Sunday Herald Sun

"There's not a bad track on the album. And vocally, she's a revelation. One minute sweet and vulnerable, the next feisty and direct."
In-Press

"Lisa Miller's first album was a promise, her second is the confirmation: this countrified Melbourne singer-songwriter is already a national treasure of the Tim Rogers/Paul Kelly calibre.... her economy of expression and pure emotional insights are hitched to the sly wit and subtle melodic sense of a veteran."
West Australian

"Miller stakes her claim as one of the country's best, and most under-appreciated songwriters. If Kasey Chambers recent album The Captain has had punters finally relieved they've found an Australian country album they can listen to without wincing, then Lisa Miller's latest CD should have them in raptures. As Far As A Life Goes is a true tour de force of clever, emotionally powerful songwriting and faultless musicianship."
Addicted To Noise

"Her songs bristle with tales of experience and compassion. Full of wisdom, wit and a wry sense of humour, she disarms bitterness and revenge with delightful ease."
Daily Examiner

"Even if posessing a voice warm and rich enough to melt butter was where Lisa Miller's talent started and stopped she'd be worth a listen. But the fact that Miller's proficiency extends to first rate, affecting songwriting (with a perfect balance between earnestness and wry humour) makes her one of this country's finest singer/songwriters."
In-Press

"Conveys a casual, but arrogant and assured toughness which many other musicians can only achieve with bluster and swearing."
Woroni

"Melbourne's Lisa Miller deserves greatness. She's one hell of a vocalist, a clever songwriter and a woman of impeccable musical taste."
Cairns Post

"The full scale of Lisa Miller's songwriting becomes apparent. Add to that a voice that can swith from a tough Chrissie Hynde sneer to a tender Lucinda Williams whisper, and you've got a quite brilliant album."
Rave

"Lisa Miller's first album 'Quiet Girl With A Credit Card' received such rave reviews that this second album has been eagerly anticipated. It does not disappoint - eleven new songs bursting with experience, wisdom and a wry sense of humour."
Scene

"The thing that strikes you immediately when you hear Miller's voice is the emotion she puts into her songs. That, in turn, transforms her music into very powerful experiences."
Sunday Times

"An album without a weak link and at least five singles to pick from. This is the performance of an artist totally in control of her medium. The sound is exactly right for the song, her voice carrying that cutesy/dumb resignation of pop, charged with a lyric of deadly intent."
The Age

"There's nothing more rewarding than discovering an artist that knocks you off your feet. For this writer, Lisa Miller is one such artist."
Time Off

"Miller doesn't let songs come off the cuff, floating on subconcious images/desires/images, she clearly spells out just what she's saying, who she's saying it to, and what it all means."
Beat Magazine (Album Of The Week)

"The release of her impressive debut put her name into people's lists of great Australian songwriters. Miller's new album is more evidence of her ability to document the heart's big issues in the space of a pop song."
Beat

"Miller's 1996 debut announced the arrival of a major talent. As Far As A Life Goes is a compelling, if unsettling, follow-up. From the knowing irony in the opening track, to the limits alluded to in the title track, Miller uncompromisingly examines romantic illusions." 4 Stars.
Sunday Age

"Miller's stunning new album, As far As A Life Goes, is full of sad songs that make you feel good."
The Age EG

Bandcamp Daily  your guide to the world of Bandcamp

Interviews With Butcher Brown and Slauson Malone, plus LP of the week by SAULT.