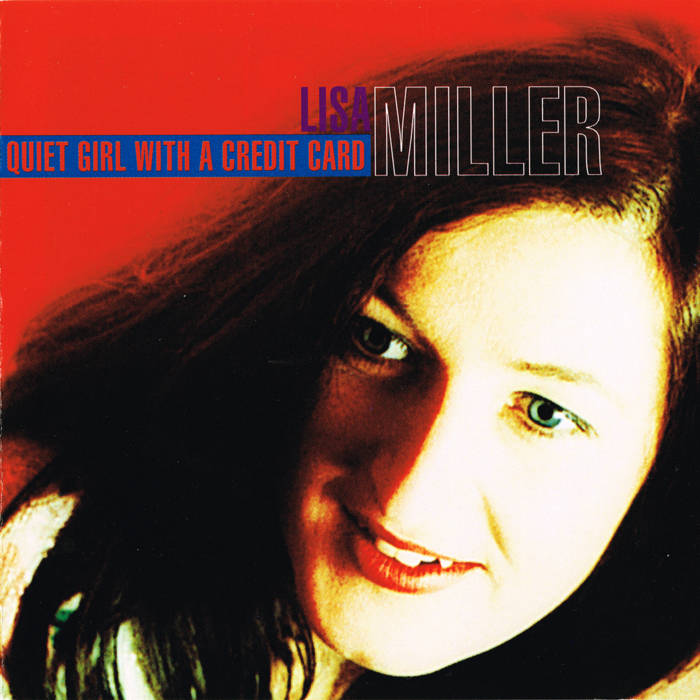 Lisa Miller's sweet voice has a steely-edged determined and authority. So subtly, she graces her debut CD with it. Quiet Girl with a Credit Card is that very album you put on your player to let the repeat button do it incessant work. In fact, the more you listen, the more you are converted. When country music mixes tradition with a little edge, the results are invariably stupendous. But Lisa Miller has taste and style. Her shot at Dan Penn's powerful A Woman left Lonely is a case in point. Its very own soul kind of feeling, if you will, gently rises like a determined vehicle climbing a damp, winding mountain road. You can feel a shiver and an eventual imminent relief which is heightened by sinuous pedal steel. The edge is tougher and more instrumentally defined on her own False Waltz with its inveigling sinister blues ambience where a creeping voodoo rhythm is punctuated by chipping rhythm guitar. Miller cuts through this superbly eerie canvas and marks her first album with a ripping uppercut. In an age when country music has become as safe as milk, Lisa Miller and that select band of performers like Iris DeMent and Billy Joe Shaver who defy this conservatism, do the music a service by stripping away it blandness. And there is nothing bland about Quiet Girl with a Credit Card. It's daring, different and teeming with integrity.
Terry Reilly, Beat Magazine

THE ART of liner-note writing is dying. Gone the way of the LP, whose back covers were often once - even further back in time - graced by informative, and at best, even evocative words.

But that’s not why I was delighted to accept the invitation to pen a few words for this, the debut album by Lisa Miller. I was not possessed by a vision of single-handedly resurrecting this lost art. I am simply honoured to be involved in the launching of such a fine new artist.

I am reminded of a set of notes George Frazier wrote for a Miles Davis ‘Greatest Hits’ album called The War Lord of the Weejuns (the notes that is, not the album). The estimable Frazier spent some twelve hundred words discussing his personal philosophy of dress and how Miles was his own model of sartorial cool. He concluded thusly: “When not selecting additions to his wardrobe, Miles Davis is a professional trumpet player. People who know about such things tell me he shows a lot of promise.”

I would like to be able to tell you, say, what a wonderful cook Lisa Miller is - which she is. But it was all very well for George Frazier; Miles Davis was quite the most famous jazzman in the world at the time the album in question was released. It is only now that Lisa Miller’s career is taking off, and so surely all that’s called for is general introduction. I will reserve my more creative urges for The Best of Lisa Miller, due, almost certainly, in just a couple of years time...

Born and raised in Melbourne‘s south-eastern suburbs, Lisa was the only girl among her four brothers, which may explain something. Her family is an artistic one; her father and one of her brothers are both well known painters. Music was a constant presence: Lisa‘s father played a little guitar, as did her eldest brother, who brought home The Beatles White Album and Bob Dylan‘s Self-Portrait one Chistmas.

It wasn’t long before Lisa herself was stealing away to her room, picking out tunes on a guitar and trying to fit words she wrote to them. After school, she went to teacher’s college: but when she found herself getting even more involved with music - playing in a couple of bars and clubs and evensome of the nicer ones,dabbling in the divergent styles: R&B, rockabilly, country, even jazz. Yet, although the magnitude of Lisa’s natural talent was becoming increasingly clear - for her voice is a gift which experience has only improved upon - she was still singing purely for the love of it. She was honing her craft, searching for her own voice ...
Showbusiness, of course, is full of charlatans running on nothing but ambition, and so just having talent alone isn’t enough. It was then, though, that Lisa was spotted by one of W.Minc’s eagle-eyed talent scouts. Lisa must rank as one of the greatest discoveries of the currently flourishing Melbourne music scene. Firstly, she has a crystalline tone - but it’s not pristine, it’s underlined by the maturity of a life lived , boasts a certain toughness, but retains also a vulnerability and an edge of innocence. Lisa is thus convincing addressing any amount of loss, all the various degrees of love ...

This album‘s producer ‘Evil’ Graham Lee, who has played pedal steel with Lisa on and off over the years - although doesn’t do so here - recalls the first time he saw/heard her. “She called me and asked me to come and play with the band she was in, Truckasaurus - unrehearsed. I’d seen her before; they did a few standards, but a bit of original stuff too. But we got through okay. I’d always liked her singing, and she had an engaging on-stage personality. But the thing I didn’t realise was, like, I’d ask her, whose song was that when I thought she’d just done some obscure old gem, you know and she’d say, ‘’Mine“. So that was pretty impressive.”

Lisa had a modicum of experience in the recording studio prior to cutting this album. But drawing on a pool of some of the finest musicians in Melbourne, Graham Lee has produced a record which will put his own credentials beyond doubt as well.

”I just wanted the songs to find their own ground“, he said. “That’s the real strength, the songs, but I don’t know what influenced the arrangements and all that, they just happened. Lisa’s a real perfectionist, and she just wanted to do the right thing by the songs too. I mean, we didn’t always agree on things, but in the end, it’s not far from what either of us wanted and we‘re both pretty happy.”

Seven of the album’s eleven tracks are original Lisa Miller compositions, of which she can be understandly proud. But they will speak for themselves; especially telling, perhaps, is Lisa‘s selection of covers, which puts contemporaries Dave Graney and Conway Savage on a par with Dylan and Charlie Rich. The Silver Fox meets the Golden Wolverine! You’re A Big Girl Now came up one day when Lisa‘s husband Ben - who contributes the odd bass part on the album - was just running through old Dylan bootleg LPs. “I thought you’d like that one,” he said when Lisa responded to the song in question. It‘s a Dylan song a lot of women especially have staked a claim on. A Woman Left Lonely, written by Dan Penn and Spooner Oldham - the illustrious Memphis partnership responsible for such country-soul classics as Do Right Woman and Dark End of The Street - was first a hit for Charlie Rich in the early seventies. It was actually originally pitched at Janis Joplin though, and indeed covered by her on Pearl. Lisa didn‘t even know of that version when she cut hers; but then, hers is quite faithful to the Billy Sherrill-produced Charlie Rich version. “It’s such a strong song to sing” says Lisa. I’m Gonna Live My Life (I’m Gonna Take My Time) was one of a couple of songs Dave Graney pitched at Lisa. Graney’s talent is so profligate that he tosses off tunes of this calibre. “Again,” says Lisa, “it was a strong woman’s song, and lots of fun to do. It was just great to do one of Dave’s songs.”

Conway Savage’s Too Dark to See originally appeared on the debut solo EP by the Bad Seeds’ pianist a couple of years ago. “It‘s another one, a great song to perform,” says Lisa,“so sparse and moody you have to really get inside it. It actually gave us quite a bit of grief in the studio, that one, we almost ditched it altogether. But we did it over, completely live, and that’s the first take we used, and it’s just about my favourite track on the album.”

Is it pop, is it rock, is it country? This is the sort of question that need only concern radio programmers and train-spotters who would wish to box Lisa Miller in. All the re st of us need to know is that it’s good. When not singing, when she’s got the time, Lisa likes to cook. She is an excellent cook. Of course, the similarities between food and music are quite significant - but it’s too easy to strain such a metaphor... Let‘s just say that Quiet Girl With a Credit Card is as good as debuts get.

And if you want to know where that enigmatic title comes from - well, you‘re just going to have to listen to the LP, aren’t you?

Bandcamp Daily  your guide to the world of Bandcamp

Interviews With Butcher Brown and Slauson Malone, plus LP of the week by SAULT.